Lenni - C'est moi, and other perspectives on freedom 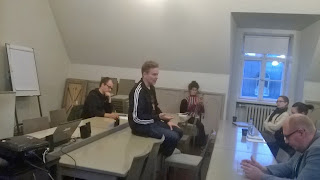 Yrjö Hirn, the first internationally acclaimed Finnish aesthetician (1870-1952), was born on December 7. As a hommage to Hirn, The Finnish Society for Aesthetics organizes its annual seminar as close as possible to this date. This year the seminar (in Finnish) was held December 3rd in the House of Science and Letters in Helsinki.

Two members of the board, Harri Mäcklin and Pajari Räsänen had chosen the title Freedom and Radical Responsibility (Vapaus ja radikaali vastuu). The speakers were Marko Gylén, Pirkko Holmberg, Martta Heikkilä and Teemu Mäki (in the picture). Marko Gylén analyzed the way the racist troll wing of the Finns Party has been using the concept 'freedom of speech' to defend its discourse. Pirkko Holmberg lectured on Friedrich Schiller as a philosopher of freedom. Martta Heikkilä discussed artistic freedom in various ways. Teemu Mäki defended freedom of speech, even hate speech, and raised intensive reactions. We had a good audience, as always. The speakers received constructive criticism.

As every year, this was also a date for prizes. The oldest of them (1997) is The Aesthetic Deed of the Year (local prize). This year it went to Timo Santala and his project Minäkin olen Lenni. A mother of a 4 year old boy wrote a note in the social media which became famous. She described how much critique, prejudices and negative comments her son had received just following his interest in pink, Hello Kitty and figure skating. The story was sad, and activist Timo Santala, who is famous for inventing the restaurant day, decided to put up a solidarity page in the social media. Minäkin olen Lenni, which translates to I am Lenni too, raised a lot of discussion about personal freedom. How can aesthetic taste become a reason for discrimination?

Last year the prize was given to choreographer Sonya Lindfors (jury: Veera Launis, Raine Vasquez) and the year before that to street painter Viva Granlund (jury: Sasha Huber, Max Ryynänen).

As every year, the society organized its annual meeting an hour before the seminar. No revolutionary decisions were made. But we intend to become even more active in the future - also internationally.

Max Ryynänen
Chair of the Finnish Society for Aesthetics
Posted by Max Ryynänen at 9:17 AM

The Finnish Society for Aesthetics

The Finnish Society for Aesthetics was founded 1972. It has approximately 140 members. The society functions as a co-operative forum for scholars, students and other people showing interest in aesthetics. It aspires to develop research in aesthetics, to create contacts between arts and sciences, and to nourish discussions on aesthetic values. The membership of the society is open to everyone interested in the society.