ARTICLE OF THE YEAR 2016: MADALINA DIACONU


The Finnish Society for Aesthetics and The Slovak Association for Aesthetics have recognized Mădălina Diaconu’s article “Longing for Clouds – Does Beautiful Weather haveto be Fine?” for receipt of the Article of the Year in the Field of Aesthetics award.

The main goal of the nomination is to highlight some of the good work in our field which easily goes unnoticed following the immense amount of publication within this tiny discipline. We hope that at least one great article, would every year, find all the readers it deserves! “Longing for Clouds” was published in Contemporary Aesthetics (2015, Volume 13). 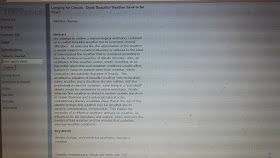