DISGUST AND FORM. The Activities of the Finnish Society for Aesthetics 2017 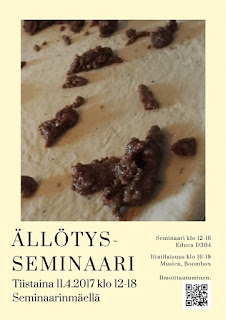 The Finnish Society of Aesthetics organizes two seminars/conferences every year. In the spring we were lucky to be able to work together with the art researchers of Jyväskylä. In April we organized together with the scholars of the Department of Music, Art and Culture at Jyväskylä University a seminar on Disgust (in Finnish: Ällötys).

The thematic initiative came from the scholars in Jyväskylä, and the idea was to discuss what disgust really is and how it can be studied - without forgetting how this affective reaction, which is often reduced to be just a biological one, is constructed. Often we associate disgust with strangers, their bodies and tastes, or foreign cultural systems, although our own cultures are also full of possible objects for experiencing disgust. The crossdisciplinary seminar was built to create a platform for discussing and experiencing together this complicated issue, its main curators being Heidi Kosonen and Susanne Ylönen.

As we feel that the Finnish Society for Aesthetics has been too Helsinki-centered, this was far from a crusade, but more of a study trip to find new people: as somebody said in the seminar, we were cleaning away the disgust which too much Helsinki-centered attitude easily raises in other parts of Finland. From these premises we gained a great dialogue in Jyväskylä.

Art critic and aesthetician Harri Mäcklin discussed in his opening talk the essence of disgust and also the fact that he had not really ever focused on studying it - which seemed to be quite a humble approach, as he actually took the audience for a brief analytical trip into the problems of the concept.

As the first speaker, Max Ryynänen discussed in his talk Chopin's Heart topics like how does it feel to experience yourself to be an object, what can we learn from mutilation in films, and how does the work of artists like Orlan and Stelarc touch upon the topic of disgust, but the main point of the talk was still to take a look at cultural practices of disgust which are central for lowbrow culture. Ryynänen performed the talk with a lamb heart in his hand, but the audience did not get disgusted - they had either prepared themselves well, or then the critical mass of the event consisted of people who liked disgusting things. 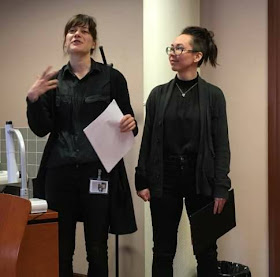 Professor of art education Pauline von Bonsdorff was a supporting angel of the event, but our main partners in building this - the key curators of it all - were the Jyväskylä-based disgust-researchers Heidi Kosonen and Susanne Ylönen. In their talk Death, darkness, disgust and other dubious contents, they dreamed about a research project and in one sidepath even about a research center for the topic. Kosonen's and Ylönen's talk was a bold mash-up of taboos, children's horror stories and popular entertainment figures like Hodor from Game of Thrones and the raverap band Die Antwoord. Besides moralist disgust the examples touched upon e.g. physical reactions when facing disgusting things, like e.g. bugs. Kosonen and Ylönen said they were interested in the topic because the need for suppression and the desire for pleasure are both strongly present in it. This dialogical cultural dynamics can be seen in everyday issues like talking to someone in an overtly affectionate or childish manner or in the way taboo issues get presented in the media.

In the end of the seminar day Heta Marttinen chaired a panel discussion with musicologist Henna-Riikka Peltola, cultural educator Matti Itkonen, aesthetician Harri Mäcklin, musician Akseli Hiltunen, literary scholar Anna Helle and obesity scholar Hannele Harjunen. There seemed to be no shared idea of disgust, only a reaction, an experience and the need to communicate it. In the discussion Matti Itkonen said something interesting. He claimed that disgust could be seen as a possibility to build bridges between cultures, as it as a reaction is quite universal. 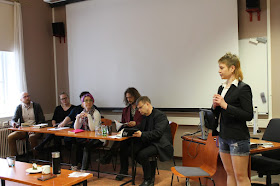 In the afterparty (supported by Jyväskylän yliopiston kulttuuritoimikunta) in Musician Boombox the participants fried crickets, drank Gambina, ate Georgian khachapuri and listen to Akseli Hiltunen's band Akseli Hiltunen. Elonen company sponsored the event with some mämmi, which has for long been one of Finland's cultural disgust symbols internationally. In musicologist Henna-Riikka Peltola's auditive disgust lab one could go and test how soundscapes can easily create a feeling of disgust.

The day ended heretically with a plesant mainstream dinner in the classical hub for Jyväskylä's academic decadence, Sohwi.

A great deal of our efforts in 2017 has already been about working for next years main event, the International Association of Aesthetics conference Margins, Futures and Tasks of Aesthetics, which the Society organizes together with Aalto University's Department of Art. At this point the keynotes have been announced and they are Yuriko Saito (Rhode Island School of Design), Jack Halberstam (Columbia University) and Elisabetta Di Stefano (University of Palermo). We are seriously thinking what will happen with our small 'hyasinth discipline' aesthetics (I am here quoting queer scholars Antu Sorainen who uses this term about disciplines which are small and easy to clean away in University reforms) and we believe the future might be more about cooperation than the history of aesthetics has been so far.

The fall seminar was organized December 1, together with ViCCA, i.e. the Visual Culture and Contemporary Art MA program of Aalto ARTS. The space was Otakaari 1 in Otaniemi. We tried to nail an old topic which has not been very trendy for long, i.e. form.

Nora Sternfeld, Austrian intellectual and curator who is the professor of curating in Aalto University, launched the seminar with her talk "Form, sedimented conflict", where she discussed how political antagonisms get hidden in societal forms. Margus Vihalem's (University of Tallinn) talk touched upon a nearly forgotten book on aesthetics by Henri Lefevbre and some other paths of thinking connected to form in French philosophy. After the break Petteri Enroth discussed Adorno's philosophical formalism in his talk "What is Ugliness: Adorno and the Original Sin of Art". In the end Martta Heikkilä took us for a ride in the history of French philosophy and its adventures in the topic of form.

Like every year the society nominated scholars and communities for their good work in aesthetics. The Article of the Year Award, which the society every year nominates together with the Slovak Association for Aesthetics, was this year chosen by Sanna Lehtinen (FSA) and Michaela Pastekova (SSA). It went to Kevin Melchionne's "Aesthetic Choice", which was published in the British Journal of Aesthetics (BJA 57 (3), pp. 283-298). According to Lehtinen and Pastekova Melchionne brings an important, but surprisingly understudied topic (choices of objects for aesthetic experience, in order to have a fulfilling aesthetic life) under examination. A new area of discussion will surely begin from this fresh opening. The choice of this article emphasizes also the value of the contributions of independent scholars to the development of academic aesthetics.

For the Aesthetic Deed of the Year in Finland the secretary of the society and the board member Silvia Hosseini chose the East Helsinki based event Kontula Electronic, which has not just brought electronic music to a new suburb, but also functions as a cultural platform for developing urban culture.

The Aesthetic Deed of the Year in the World was picked by board member Martta Heikkilä and artist Mia Kallio. The nomination went to The Billion Tree Tsunami Afforestation Project in Pakistan. This project has been realised in Pakistan’s northern Khyber Pakhtunkhwa province. The Billion Tree Tsunami was launched in 2015, and by now it has surpassed its target by restoring and planting trees in 350 000 hectares of degraded forest landscapes. The project is aimed at preventing land degradation and loss in the mountainous, formerly forested KPK province in the Hindu Kush mountain range. The initial goal of the project has been achieved in 2017, which is the reason for nominating the Billion Tree Tsunami The Global Aesthetic Achievement of this year. The campaign is supported by the United Nations Environment Programme (UNEP) and the World Wildlife Fund (WWF). It has achieved its restoration target through a combination of protected natural regeneration and planned afforestation. In addition, it has established 13 000 private tree nurseries, which have already boosted local incomes, generated thousands of green jobs, and empowered unemployed youth and women in the province. The campaign simultaneously helped KPK province fulfil its commitment to the Bonn Challenge, which is a global effort to bring 150 million hectares of the world’s deforested and degraded land into restoration by 2020, and 350 million hectares by 2030. The project has added tree resources to agricultural lands currently engaged in farm forestry, improved biodiversity by restoring wildlife shelters, and will contribute to carbon dioxide sequestration through new tree plantations. Thus, the Billion Tree Tsunami campaign has multiple benefits: it enhances the aesthetic values of the region in addition to its positive influence on the social structures of Northern Pakistan and helps in fighting the global climate change.

The society fulfilled its promise of organizing two seminars/conferences per year. Next year the other one will be Margins, Futures and Tasks of Aesthetics, and the other one we hope to organize this time with some people from the literature scene.

Max Ryynänen, Chair of the Finnish Society for Aesthetics